It's a Sin: casting the public eye on public health 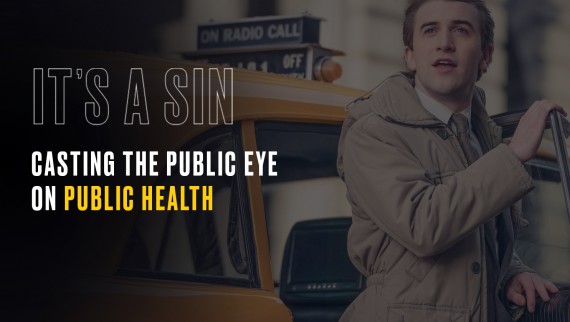 TV series It’s a Sin has quickly won critical and audience acclaim, including cementing All 4’s highest monthly viewers since the platform launched in 2006. The show, which was rejected by the BBC and ITV before eventually being picked up, starts with a familiar theme – a group of friends looking to move to a big city. Set in the 80s, and at the height of the HIV and Aids epidemic, their lives rapidly change as they hear news reports, ads and rumours about a new mystery illness.

The series highlights the UK’s response to the epidemic, particularly in failures of communication. Misinformation led to many deaths, as the government and even the medical community lacked understanding about the virus, furthering stigma and misguided rumours. Writer Russell T Davis based it on his own experiences at the time, including the way that information was communicated to the public.

Marketing: a matter of life or death?

The HIV and Aids epidemic resulted in the biggest public health ad campaign at the time – the infamous ‘Tombstone’ campaign was broadcast on TV, with leaflets sent to around 23 million households in the UK. The campaign was categorised by apocalyptic imagery and a sense of doom – John Hurt’s voiceover paired with a volcano eruption and a stark tombstone furthered public panic and reiterated the seriousness of HIV/Aids.

The campaign did lead to a drop in HIV cases, and follow up research proved that a vast number of the public changed their behaviour as a direct result of the campaign. However, this campaign was years too late for many, and prior to this, communication around HIV/Aids was rooted in stigma and apathy. The initial name for the disease was GRID, or ‘gay-related immune deficiency’, and any radio or news reports highlighted repeatedly that it affected the gay community – and in the early 80s reported that haemophiliacs, Haitians, heroin addicts and homosexuals were most at risk. These reports are discussed in It’s a Sin – Ritchie points out this list and jokes about it, “Like there’s a disease which just targets the letter ‘h’. Who’s it going to get next? People from Hartlepool?”

Conspiracy theories and inaccurate information could be found everywhere, with news outlets adding consistent fuel to the fire. The Mail on Sunday warned Britain of a ‘gay virus plague’, and establishment figures like James Anderton described patients as being “in a human cesspit of their own making”. Public opinion was massively swayed, leading to a delay in action and an increase in outlandish conspiracy theories. Ritchie highlights some of these theories in It’s a Sin, pointing out that the public, “say it was set up in a laboratory to kill us...it’s the Russians...it’s from the jungle.”

The UK is often cited as being one of the first countries to tackle the epidemic publicly, but it was almost five years after the first deaths that the infamous ‘tombstone’ ad was shown to the public. The campaign faced backlash from the government, with Thatcher believing that any mention of sex would be too scandalous for the public eye, and could lead to a rise in unsafe sex. It also faced backlash for leaning on scare tactics, with the TV ad still lingering in the minds of people who saw it more than 30 years on. Norman Fowler, the Secretary of Health a the time, looked back on the ad and noted that it was ‘a life or death situation … there was no time to think about whether it might offend one or two people’.

The campaign was held back by government panic – under Section 28, ‘promoting homosexuality’ was illegal, meaning that any published materials couldn’t portray or even reference LGBT+ relationships. Davies covers this in the show – the audience sees Ash being forced to remove books from the school library that are deemed to promote a homosexual lifestyle, as discussion in classrooms was completely banned. This left a great many young people unaware of the dangers of HIV and Aids, and Thatcher’s main fear surrounding the tombstone campaign was that the ads would reach these young people. She argued that the campaign should only feature in GP surgeries and public lavatories, as opposed to hitting households – in the interest of ‘protecting’ young teens from reading about risky sex.

The ad’s designer, Malcolm Gaskin, reflects on the approach taken, and how scare tactics fed into the design of the campaign. The TV ad was only 40 seconds long, not allowing for any detailed information – this would follow in the leaflets distributed to homes. He later pointed out that,

‘Scaring people was deliberate … originally it was even scarier: we had metallic sirens blaring like the beginning of a nuclear war. But Thatcher thought we were overdramatising it’.

However, the big, scary advert wasn’t the only element of the campaign. Alongside the blanket awareness campaign that the ad symbolised, there were smaller campaigns that offered tailored advice to groups that could be impacted by misinformation like dentists, tattooists and hairdressers.

How does the handling of the COVID-19 pandemic compare?

There are some clear parallels between the government health campaign of the mid-80s in response to HIV and Aids and the current COVID-19 pandemic, but it’s important not to overstate these. Aside from differences in transmission, and in onset of symptoms, the government response has been significantly swifter in the case of COVID-19. Arguably the messaging around COVID-19 has been delivered without the stigma that was attached to HIV and Aids for the LGBTQ+ community, and perhaps after so many lives were impacted and destroyed by Aids, public sentiment has shifted to become more receptive to health campaigns.

One of the biggest similarities between the Aids epidemic and COVID-19 has been the problematic misinformation and muddled advice – not to mention the occasional conspiracy theory. Davies highlights the dangers of late action in It’s a Sin, and although the show leans on his personal experience of London at the time, it doesn’t seem entirely unintentional to release the show in the current climate. One similarity we see is the prevalence of outlandish conspiracy theories – much like the ideas Ritchie spells out in the show, Davies remembers widespread rumours of HIV and Aids being ‘created by the Russians, the Chinese, the Americans, … escaped from some villainous hi-tech secret laboratories (sound familiar?)’. The scale of misinformation has exploded significantly with the internet and social media at our fingertips, making combatting ‘fake news’ harder than ever for public health campaigns.

We’re also seeing public advertising that certainly follows in the footsteps of 1986’s ‘tombstone’ campaign. Albeit slightly less apocalyptic, government ads touting slogans have dominated most of 2020, including shifts from the relaxed ‘wash your hands’ to the more serious ‘stay home’ and enforcement of wearing masks. Recently, TV ads have leaned back towards scare tactics from the past, with the government’s ‘look them in the eyes’ campaign. Although it seemed there was a reluctance to impose widespread protective measures, with the UK adopting restrictions like a national lockdown later than other countries, it still seems that public health messaging has become more impactful when it comes to correcting information and providing the facts.

It’s clear that a lack of understanding around health doesn’t just contribute to widespread misinformation, but can cost lives. The characters in It’s a Sin encounter rumours in bars and conspiracy theories furthered by print newspaper, but in 2021 we have the added element of the digital space, where for many if it’s on Twitter or Facebook, it must be true.

It’s not just the government that have a responsibility to inform and warn the public when it comes to health, but also of thought leaders in the digital world that have the ability to clarify information. Even at the height of the HIV and Aids epidemic, it was the messenger, as opposed to the message, that proved most successful for changing behaviours. Separate campaigns from LGBTQ+ charities like the Terrence Higgins Trust worked to spread awareness and provide home-help, counselling and sex education before the government even considered taking action, and it’s content across social media that is working to reduce misinformation and correct conspiracy theories in our current pandemic.

How effective are your campaigns?

Creating engaging marketing campaigns can come with all sorts of complexities, like how to best segment your audience, which channels are most valuable or which messaging style will have the greatest impact. At BBI Health we have dedicated strategists, designers, digital marketers and developers with a breadth of experience in bringing content-led campaigns to life for healthcare organisations. Contact us today to find out how we can help you achieve great results on your next project.